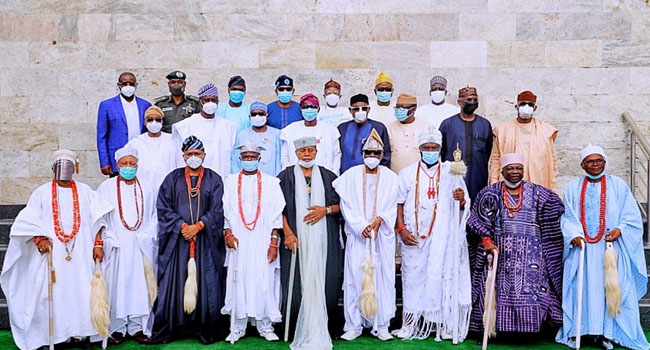 South-west leaders, including governors, ministers and traditional leaders, on Sunday called for the strengthening of security in the geo-political zone and in the country.

“The security architecture of the country requires adjustment to adequately address the threat and realities of insecurity in the country. There should be more police presence in communities in Southwest states”, they said in a communiqué.

Yesterday’s meeting of Southwest governors and traditional rulers with a presidential delegation led by Chief of Staff to the President Prof. Ibrahim Agboola Gambari, was the third leg of the consultation initiated by President Muhammadu Buhari following the #EndSARS protests and its aftermath which resulted in massive looting and reckless destruction of public and private properties – especially in Lagos.

The Presidential delegation which included Inspector-General of Police Mohammed Adamu and Minister of Information Lai Mohammed met with North’s leaders last week in Kaduna and with Southeast leaders in Enugu on Saturday.

At yesterday’s meeting it was said the the police should get more attention for their needs so that they can do more to protect lives, properties and enhance security all over the country – the police are currently grossly underfunded.

It called for more intelligence-driven policing to prevent “the repeat of what happened in the country, following the #EndSARS demonstrations.”

The communiqué also called for the review of the report of the 2014 national conference with a view to implementing “some of the recommendations especially with reference to security, economy and equal treatment for citizens.”

The leaders called for the reopening of the country’s international borders.

“We believe that the prolonged closure of the borders has caused economic difficulties and should be re-examined to alleviate problems of the people in the border communities and prices of some essential commodities. There is need to review the closure and permit resumption of economic and trading activities”