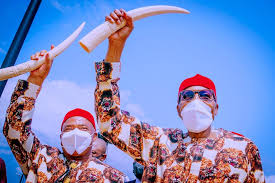 The Presidency has explained how President Muhammadu Buhari’s comment on Governor Hope Uzodinma of Imo at the meeting with southeast Leaders has been quoted out of context.

Buhari was quoted as saying that “I’ll be careful with your future invitations” at end of his speech at the occasion.

Putting that in context, Spokesman Femi Adesina said, “The presidential aide quoted the president’s words at the event as: “I am overwhelmed by this reception, overwhelmed in the sense that when I accepted the invitation by the Imo State Governor, who wants to justify investments the government has done to the people of Imo State,

“I thought I would see the bridges, the roads, and a few renovations.

“He didn’t tell me he was going to get the whole Igbo leadership here. So in the future when he invites me, I’ll know what to do. But I think he has done what the military didn’t like. He has achieved surprise. He has surprised me beyond description.”

He said the president later in his concluding statement at the same event, made reference to his earlier remarks on the ‘‘surprise’’ action pulled by the governor.

And on a lighter note, the President quipped: “Governor of Imo State, I cannot thank you enough, but I will be careful with your future invitations.”

Adesina identified those he described as purveyors of disinformation as brains behind the fake news.

According to him, Buhari at the event made it clear that he was expressly overwhelmed by the reception and galaxy of personalities that travelled from the five South Eastern states to have a heart-to-heart discussion with him in Owerri.

Adesina said the President had assumed that he was in the state to commission projects alone but the governor pulled a surprise on him with the calibre of over 50 elders that came to receive him.

The Nigerian Civil Aviation Authority (NCAA) has asked all foreign airlines operating in and out of Nigeria not to deny Nigerians boarding over their inability to show evidence of payment for the day-7 COVID-19 PCR test or to generate a paid QR code.

The Director-General of the NCAA, Capt. Musa Nuhu, announced this in a letter issued on Saturday to all airlines operating in and out of the country.