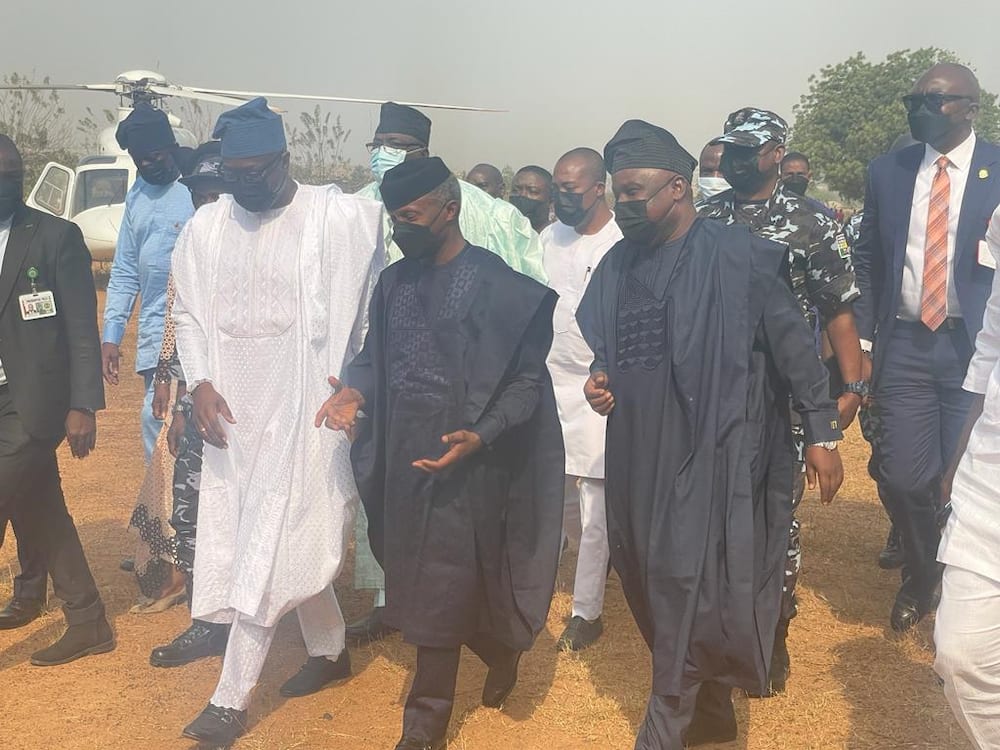 The vice president said he brought his condolences to Gov. Seyi Makinde, people of Ogbomosho and the entire family of the deceased on behalf of President Muhammadu Buhari.

According to Osinbajo, the late Oyewumi had an exceptionally long, peaceful, and progressive reign, which deserved continuous thanksgiving to God Almighty.

He said, “The Ajagungbade III lived and conquered his people. He conquered illiteracy and underdevelopment. He loved his people, served his community and remains a source of inspiration.

“It is a very special privilege for me to join the family of our dear departed monarch, the illustrious citizens of this great town, and the Government and people of Oyo State, to thank God Almighty for the blessed memory of the legendary king.

“Today, we celebrate the life and times of a much loved and respected monarch, an astute statesman, and a great leader among Yoruba Obas, Alayeluwa Oba (Dr.) Oladunni Oyewumi, Ajagungbade III, who departed this world on Monday, December 13, 2021, at the ripe old age of 95 years.

“I know that no matter how long our loved ones live, we all still want them around for longer especially when they have been so consequential and have made such a significant impact in our lives! But these things are for God to order, with the assurance that God loves him even more, the best we can do now is pray that his transition shall herald a time of more abundant grace and goodness in Ogbomosho, and in Nigeria as a whole. I, therefore, join the whole town in saying, “eyin baba a dara o!”

“On behalf of His Excellency, President Muhammadu Buhari, GCFR, and the entire Government and people of Nigeria, I express my deepest condolences to His Excellency, the Governor of Oyo State, Engineer Seyi Makinde, the Gbagun Ruling House of Ogbomoso, the wives and children of Soun Ajagungbade III, the entire Royal Family, as well as all the people of Ogbomoso.

“The late Soun of Ogbomoso, Oba Oladunni Oyewumi, had an exceptionally long, peaceful, and progressive reign, for which we must just continue to give thanks to God Almighty. Having ascended the throne on the 24th of October, 1973, he has delivered four decades and eight years of exceptional and transformational leadership, leaving behind the indelible marks of peace and prosperity.

“Without a doubt, the Oba’s passing has created a big vacuum among the league of traditional rulers in Nigeria. And this is not just because of his age and almost half a century on the throne. It is because he was not just there, he made remarkable contributions to Ogbomosho and to Nigeria, for which the Nation honoured him twice, first as Commander of the Order of the Niger (CON) and then as Commander of the Federal Republic (CFR).

“His time certainly brought commendable development to this great and ancient town of Yorubaland, so we can say confidently that the Scriptures are fulfilled today – Didun ni iranti olododo.

“It is worthy of note that upon his ascension to the throne of his forefathers, His Royal Majesty, Soun Ajagungbade III became the first Soun of Ogbomoso land to wear the beaded crown. This introduced a new historical perspective into the Obaship system, which he went on to amply justify. But the event also went far beyond mere symbolism, by his illustrious and noble reign, Ajagungbade III has established and affirmed the place of Ogbomoso among the great cities of Nigeria, and proved over and again that the honour was so well deserved.

“At a gathering such as this, we must recall those attributes that stood out in the life of this great man. By his own account, one of them is contentment. Speaking during the celebration of his 90th birthday anniversary, he attributed his longevity on the throne, and on the earth, to the Almighty God and an attitude of contentment.

“I am contented. I don’t rush to own or have the whole world. What a testimony to a peaceful life well spent!

“But we must also note that while contented with outcomes, he was never one to sit idly doing nothing. He always made his plans diligently and meticulously. Then with remarkable diligence, he always made all the efforts necessary to see them to fruition. Thus, Ajagungbade III didn’t just live through his 95 years of sojourn on earth, his entire existence, both private and public, encapsulates a noble life of transparent leadership and service.

“He was a thoroughbred leader who dedicated himself to the people of Ogbomoso, for both their social and human capital development.

“Clearly, Oba Oyewunmi Ajagungbade III loved his people and loved Ogbomoso. The progress of his domain meant everything to him. Indeed, he was once reported as saying “the progress of Ogbomoso is my motto.

“True to his name, Ajagungbade III has lived and has conquered his people. He conquered illiteracy, and underdevelopment, he loved the people, he served his community, and remains a source of inspiration to all, including many who had served this country in the highest offices, who regularly sought his counsel. He was father to all and he held his place with dignity, neutrality and selfless commitment. While he will be missed, let us all be comforted by the good memories he left for us all.”

* Akala: During a condolence visit to the family of Alao-Akala in Ogbomoso later, he described the late former Governor Adebayo Alao-Akala of Oyo State as a generous, kindhearted and decent man.

“We have profound memories of him, a man who was exceedingly generous.

“He was a titan in politics. He was a very generous, kindhearted and decent man,” the vice president said.

Osinbajo recalled how he and Alao-Akala’s nephew, Prof. Oyelowo Oyewo, used to go to him for pocket money.

“Long before I became a Professor of Law, I had known our dear uncle Adebayo Alao- Akala.

“Any time I think about him,  I smile because he was a very special being.

“Prof. Oyelowo Oyewo, the current Commissioner for Justice in Oyo State, was our link to him.

“If we needed little pocket money, we found a way of getting to our dear uncle. This was even long before he became Governor of Oyo State,” Osinbajo said.

He also recounted how  generous Alao-Akala was with advice, time and resources.

According to him, in 2015 when he  was nominated as the Vice Presidential Candidate of  APC, one of the people he consulted was Alao-Akala.

“It was Prof. Oyewo, my friend, who arranged a meeting between us in Ikoyi and he gave me advice.

“He said, ‘Professor, the vice-president’s seat is not a child’s play.’

“He was so generous, he gave me  much advice and  much support,” he said.

Osinbajo commiserated with the family, praying that all that Alao-Akala left behind would prosper.

“No one can know the extent of your pain and sadness. Only God can comfort you and keep you,” he said. He also prayed that Alao-Akala’s  children would be greater than he was.

*  In Ibadan, where he also delivered President Buhari’s condolences, he described the late Olubadan of Ibadan land, Oba Saliu Adetunji, was a man that loved his people, demonstrated genuine commitment to the progress of society and lived an accomplished life.

He was received by the palace chiefs and wife of the late monarch, Olori Rashidat Adetunji, among other members of the royal family.

Testifying to the late paramount ruler’s forthrightness, Prof. Osinbajo said “it was President Buhari who mentioned it first that when we were campaigning, Olubadan was someone who would speak his true mind with you on what he had decided to do, he wasn’t a betrayer, who would tell you one thing and do the other.”