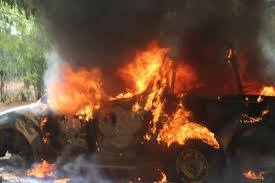 After initial denial, the Nigerian Air Force has now admitted that one of its fighter jets on a mission against terrorists “unfortunately” bombed civilians in Yobe State on Wednesday. NAF Director of Public Relations and Information, Edward Gabkwet, said in a statement today that investigation had commenced into the incident. He had, on Wednesday, denied reports linking one of its fighter jets to the bombing.