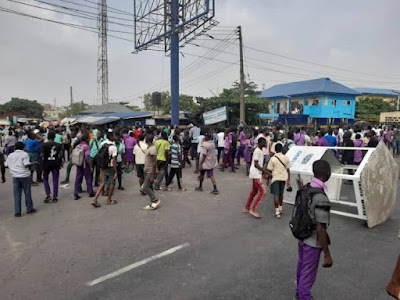 Posted at 12:42h in Society Plus by Jamiu Kamal 0 Comments
0 Likes
Share

This followed the accident that occurred at about 2.15pm on Tuesday.

A DAF truck with Registration No. APP 438 YA rammed into a crowd of students, killing some and injuring others.

Although there are reports that up to 15 students lost their lives in the accident, the Lagos State Police authorities confirmed that two students died in the crash.

Police Public Relationship Officer, Adekunle Ajisebutu, had in a statement said angry students, who were later joined by hoodlums, attempted to set ablaze Ojodu Police station for allegedly shielding the driver of the ill-fated truck.