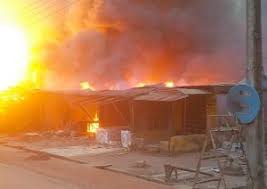 No fewer than five people were confirmed dead and several others injured in yesterday’s explosion at a gas plant in Baruwa, in the Alimosho area of Lagos.
Some 89 shops, 47 buildings, including a primary school and church as well as 23 electric poles, two transformers, gas tankers, one tricycle and a motorcycle were also affected
Sources say the explosion set off when an LPG tanker, which was in the process of discharging at Best Roof Plant, exploded.
Lagos State governor, Mr. Babajide Sanwo-Olu, has expressed deep sorrow over a gas explosion that claimed lives and destroyed properties worth several millions of naira, describing the incident as a sad memory in the life of the administration,
Also the NNPC has commiserated with the government and people of Lagos State, and particularly the residents of Baruwa area, over the gas plant fire incident.