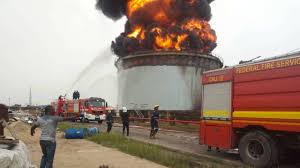 A fire outbreak was on Wednesday reported at Oando Energy tank farm located at Tego Barracks, Termina 1, Apapa in Lagos was afternoon gutted by fire. It was however contained before spreading in the area.

the South-west Zonal Coordinator of the National Emergency Management Agency (NEMA), Mr. Ibrahim Farinloye, said the fire was tackled by a combination of emergency services.

He said the tank on fire had 6,000 metric tonnes of petrol trapped “ and within the same vicinity, there are five other tanks – one has aviation fuel and diesel while others are empty.
“All tankers have been shut down to suffocate and facilitate prompt fire-fighting. The situation is under control and no threat to life.

OVH Energy, the licencee company behind the OANDO retail brand in Africa, also confirmed the incident

It said there were no casualties during the incident.

It said on its official Twitter handle: “Preliminary information about the incident reveals that the fire emanated from a tank within the terminal, we confirm reports on the fire incident which took place.

“Whilst an investigation has been launched to ascertain other details, we have a team of professional firefighters on the ground to manage the outbreak.

“Safety remains our priority at OVH Energy as we operate under high safety standards to curb incidences of fire outbreaks as well as other health and safety risks from happening at any of our stations.”