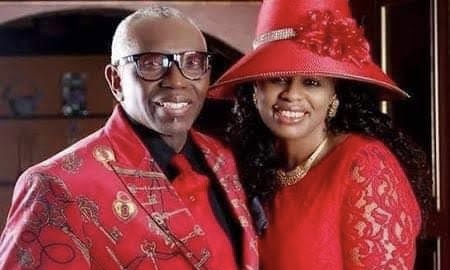 Posted at 14:14h in Society Plus by TQR Editor 0 Comments
0 Likes
Share

Reports say the 25-year-old marriage of Ayodele Oritsejafor, a former president of the Christian Association of Nigeria (CAN), with his wife Helen, has shockingly collapsed.

The former couple were reportedly bickering these past few years over allegations of infidelity and fraud on the part of Mrs Oritsejafor, necessitating her moving out of her matrimonial home and relocating to the United Kingdom.

There was also the issue of taking over the ownership of Eagle Flight Micro Finance Bank by Mrs Oritsejafor, an action her husband was vehemently against as the bank solely belonged to the church.

In 2020, Helen had accused her husband of making plans to kill her.

Oritsejafor is the founding and senior pastor of Word of Life Bible Church, located in Warri, Delta State.

He got married to Helen in 1997, 13 months after the death of his late wife Stella, with whom he founded the World of Life Bible Church on November 15, 1987.