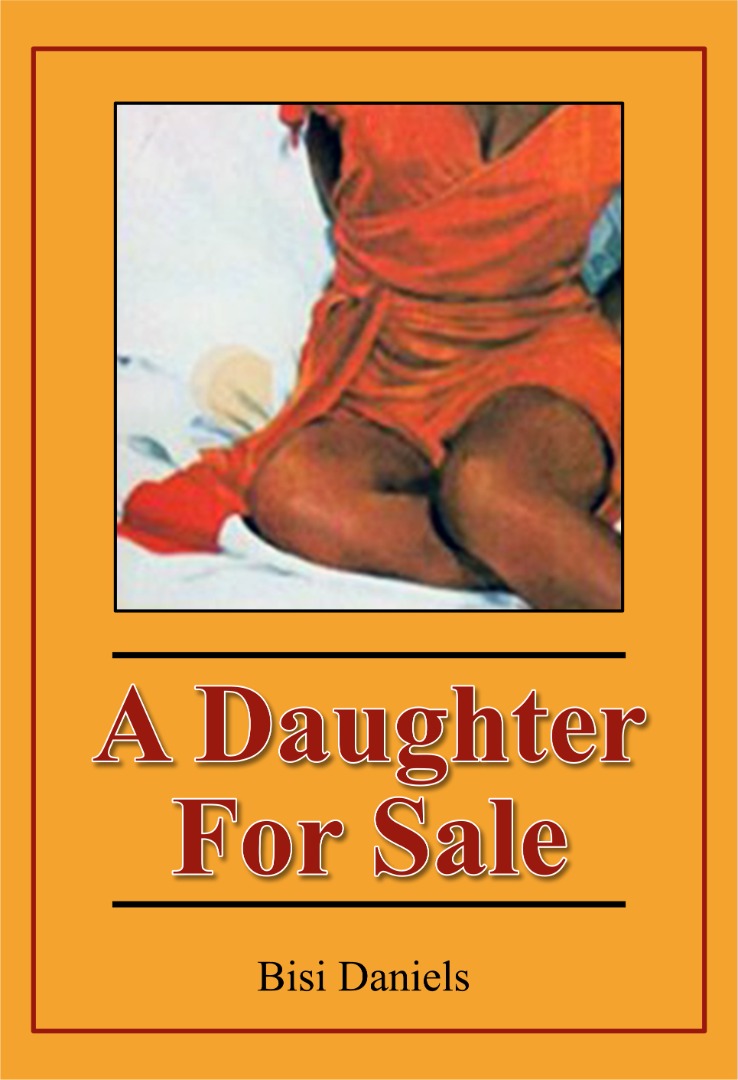 Posted at 12:44h in A DAUGHTER FOR SALE! by TQR Editor 0 Comments
0 Likes
Share

Elliot had arranged for Alice and Abel to travel by train to Canada. Once in Ottawa, Alice was checked into a private facility that not only treated her physical drug addiction, but provided counselling. Abel knew that was as important as physical therapy. After all, Alice needed to recover her dignity in the wake of the deep and ongoing trauma she had suffered. Without self-respect, there would be no impetus for her to kick her drug habit. In short, Alice needed help learning how to be a human being again. How to feel something other than fear, loathing and disgust. It was a long road, but Abel was certain the girl had the strength to travel it.

Abel was happy to see improvement in Alice’s physical health almost immediately, but he knew that after everything she had been through, her recovery would be an ongoing process. In all likelihood, one that would require a certain amount of care and maintenance for the rest of her life.

Being young, tenacious, and determined, Alice was encouraged by the early results of her treatment. But she had to be reminded that many patients suffered setbacks along the way and that she shouldn’t regard any problems she might encounter as failures on her part.

While visiting with her one morning, Abel found Alice in a wonderfully exuberant mood.

“I’ve made a decision about my future”, she declared. “I’ve thought long and hard about it, and I finally reached a conclusion. I know what I want to become.”

Abel was genuinely surprised. “Is that right?” he asked. “That’s wonderful, Alice. How did you arrive at that decision?”

Alice’s face was beaming. “The nurses here inspired me.” she said. “I’ve watched what they do and the way they handle their duties. They help so many people. I would like to do that. I think I would be an excellent nurse. I understand people. I know what it feels like to be sick and not have control of your fate. I think I could make a big difference in people’s lives. What do you think?”

“I think you would be an outstanding nurse, Alice”, Abel agreed.

Alice appeared concerned. “It requires quite a bit of schooling, though. I would have to attend university and get medical training.”

“You can do that”, Abel said, trying to be encouraging. “You’re very smart. I’m sure you’ll do very well.”

“Could you help me arrange to do it here in Canada?” Alice asked. “I won’t be leaving the clinic for quite a while, and I’d like to start as soon as possible.”

Although Abel was pleased Alice was thinking so positively about the future, he was concerned she might be moving too quickly. But Alice assured him she had checked with her counsellors, and they were all for her plan.

“For the first time in my life, I have a goal, something special that I really want to achieve.” She seemed so excited, Abel could only support her wishes. He planned to check with the counsellors anyway, just to make sure this was the best course for Alice.

Alice surprised him with her next question.

“Will you stay here in Canada, or are you going back to Nigeria?” The question was so direct and so unselfconscious that Abel had to think a minute.

“I suppose I will stay, for a while anyway.” Abel was about to ask the reason Alice had brought this up now, but he suddenly realised her motivation.  She needed help with the details of getting into school. And she needed money. Abel was pleased in an odd way that Alice was thinking so far ahead. It was a sign not only of maturity, but also of a healthy mind and ego.

“I promise you one thing, my dear. I won’t leave until you are settled in school and know how to pay for it.”

Alice smiled broadly at him. “Thank you.” Then the smile disappeared.

“What is it?” Abel said, seeing the sadness on her face.

“You suddenly reminded me of my father. Not the one you met, but the father I once knew when I was a little girl. Before he changed.”

Abel felt her grief, as if someone had died. And in fact, that was the case. The kindly caring parent had died and been replaced by a monster.

Able spoke carefully. “You never really told me about what happened with him.”

Alice took a moment, then shook her head. “I’ve been talking to the counsellors about him. Part of my treatment. I don’t really want to go into it if you don’t mind.”

“But you probably know anyway. Where once he hugged me and kissed me on the cheek, he suddenly began putting his hands on places they didn’t belong. And then he demanded more. I tried to resist, but he was too strong. Of course once it happened, he just kept coming back. And since I had already lost one struggle, I couldn’t hope to stop him. So I just let him do what he wanted. It was better than him forcing himself on me. It hurt less. And was over faster. By the time I was handed off to other men, I had so little self-respect left, it hardly mattered anymore. Anyway, I decided if men were going to use me, I’d use them back. I did manage to extort many fine gifts. But the price was very high.”

“I’m so sorry, Alice”, was all Abel could gather himself to say.

Alice brightened, as children will, shedding the sad thought and replacing it with something more delightful. “I love you, Peter. With all my heart.”

Abel’s eyes felt moist as he looked at the girl. His heart swelled with a kind of love, something he hadn’t felt since he played happily with his younger sister. It was different than the feeling he had for his wife. It was more parental, more elemental, more connected to an instinct to protect and to nurture. Men, he thought could indeed feel such things.

“Of course you must go back”, Alice said, with startling maturity. “Your work is in Nigeria. You have responsibilities there. You can’t leave The Zodiac stranded forever.”

“I will miss you”, Alice said softly.

And he knew he would miss her, too.

Abel went to work, securing Alice’s schooling. After a series of telephone calls, e-mails, faxes, and migraine headaches, he managed to have Alice’s school transcripts sent to Canada. The doctor who ran the treatment facility wrote a glowing letter of recommendation, casting her as an inspiring success story. This and her own native intelligence and charm got her accepted at several universities.

Abel, having no children and therefore never having gone through the application process with his own offspring, couldn’t believe how complicated the whole thing was. In the middle of one harried phone call, applications spread out before him and Alice. Abel had realised with some irony that he had managed to acquire classified information from government sources and wise guy informants with a lot less hassle.

The one last hurdle to be overcome was money. It always came down to that, Abel thought. The fact that money had gotten Alice into the sex trade in the first place only highlighted the trouble it endlessly created for the world. On the other hand, money spent on her schooling insured her future, and that was a good thing.

The university Alice most wanted to attend had offered her only a partial scholarship. Abel used the Internet to research charitable organisations and benefactors that might come to Alice’s financial rescue. After all she had been through, it would have been tragic for her dreams to be grounded by a lack of funding.

Abel logged onto the website for an organization called Youth Justice International, which subsidised recovery programmes for children who were enslaved by international drug runners, sex traffickers, and illegal labour cartels. YJI’s home base was located in Seoul, South Korea, but they had branches all over the world. Abel contacted their office in London and sent them an early draft of the story that he was composing for The Zodiac.

“Are you the Peter Abel?” the counsellor asked. “The one who broke the sex trade story in the Washington Post?”

Abel was flattered and humbly replied, “It’s nice to know that you are familiar with my work.”

“We are very familiar, Mr. Abel”, the woman stated. “Your reporting has been a help bringing attention to the very things we are trying to combat. And we understand you are based in Nigeria.”

“Well, Nigeria is a big window to Africa where so much of this trade takes place.  We would love to help your friend Alice in any way that we can.”

And that’s how it all happened. Within days, Alice was granted a generous stipend and her bills, both medical and educational, were covered.

Once Alice was settled, continuing her medical treatment and registered to begin her university studies, Abel bought a ticket home.

He took Alice to dinner on his last night in Canada. They shared a warm friendly meal and remembered the first night they met and how she had spent it in the guestroom of his house.

“I remember our first night vividly. You were so sweet that day and I still wonder how you were able to resist me”, she said and leaned back. “That was the beginning of my turnaround, Peter.”

“No”, he said. “You went through hell after that.”

“But the way you treated me that night never left my mind. I knew it was possible to meet kind men. I knew you were in the world. I think it kept me alive.”

There was a pause on the other end of the line. “The voice sounds familiar”, Benson said. “I could swear you sound just like Peter Abel. He used to work here.”

Abel laughed into the phone. “I didn’t fall off the world, boss”, he clarified. “I just swung from the edge of it for a while.”

The boss laughed. “You settled the girl in school?”

Of course Abel had been in touch over the weeks with Benson. His good-natured boss had allowed him to stay in Canada and finish what he started. Not professionally, for the articles were well under way. But personally. Benson knew his reporter needed closure as much as the girl he saved.

“Are you coming home soon, then?” his boss asked.

“Yes. I’ll be back in a couple of days. I don’t suppose you still have a job for me at The Zodiac, do you?”

With that, the men laughed and said their good-byes and Abel ran to catch his flight to London, which had announced its final boarding call.