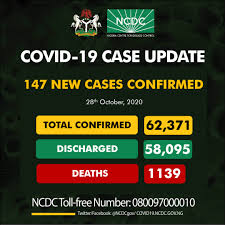 The NCDC reported 4 deaths on Wednesday, an increase from the three announced on Tuesday, raising the number of coronavirus related deaths in the country to 1139. It also reported 147 new cases and 179 recoveries. With that, the number of confirmed cases is now 62,371, with 58095 recoveries.

* The pandemic is still dangerous: French President Emmanuel Macron has announced a second national lockdown until at least the end of November; South African President Ramaphosa in self-quarantine

* Antibodies against the novel coronavirus declined rapidly in the British population during the summer, a study found on Tuesday, suggesting protection after infection may not be long lasting and raising the prospect of waning immunity in the community.