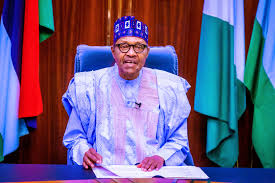 Minister of Youth and Sports Development, Sunday Dare made this disclosure, adding that President Buhari promised lasting reforms in the effort to deliver a police force Nigerians would be proud of.
The minister spoke after a meeting with the president in Abuja on Monday.
He said:“Mr President gave the assurance that the demands of the protesters are being met in a timely fashion; some have been met already. He said he accepts their demands and that government is already responding at various levels,” the minister said.

“Mr President said the youth of this country have spoken and he has heard and he has since gone to work for the youth of country, not just as a president but also as a father of the younger generation.
“He said as a father to this generation of our youth, his desire is for them to be well protected and live in a country where they enjoy their freedom and do not suffer from any form of police brutality.
“The president promised that he will ensure that the reforms as promised are met, that the reforms are long lasting, and that the reforms will deliver for our country a police force that we will be proud of.”
According to Dare, the president also said he supported the right of citizens to protest, as long as it is done peacefully, adding that police officers who maltreat or attack citizens would face the full wrath of the law.
“Mr President said that as far as he is concerned, it is important to allow the younger generation to exercise the freedom to protest but he did say that such protest must be in a peaceful manner,” he said.
“Of course he is worried about some of the exceptions to the peaceful nature of the protest. And for him it is important that these protests are properly guided. He said part of the demands that were made was to ensure those protesting are protected and any police officer that has in one way or the other attacked any protester be brought to book.

“So, Mr President thinks it’s a fundamental human right, so long as the protest is peaceful and focused. He said he has been responsive to the demands put forward by the protesters. He believes the youth to a very large extent are law abiding. They are young people with dreams and expectations of the government and the society, and they have a right to demand for certain things, which is why he has a very attentive ear to their demands.”
Dare also appealed to the youth to halt the public demonstrations “in the face of infiltration by miscreants trying to hijack these protests and give the entire protest a bad image”.