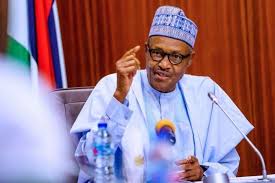 President Muhammadu Buhari, yesterday charged the nation’s security agencies to step up their efforts to adequately secure the country. He also expressed concern that currently only 2.5 percent of arable lands in Nigeria is currently being cultivated.

In a statement released by his spokesman, Garba Shehu, the President, mandated security outfits to be more relentless in maintaining peace in the country, and ensure a more harmonious relationship with communities so that they can glean intelligence.

According to him, the security situation had improved considerably over time in the North-East and South-South, and efforts were being made in North- Central and North – West, assuring that more will be done to fish out those that had been troubling the peace of the nation and citizens.

President Buhari also urged more Nigerians to embrace farming, saying he was surprised to hear that only 2.5 per cent of arable lands in the country is being cultivated.

The President, who spoke with journalists at his Daura residence after the Eid-el-Kabir prayers, stated that the Presidential Economic Advisory Council had notified him that only a small percentage of the land in the country had been used for farming, directing security outfits to work more with communities to create a more friendly environment for farmers.

After the prayers, the President also met with representatives of the National Youth Service Corps (NYSC) members serving in Daura Local Government Area of Katsina State.

He donated N1 million, two cows and 20 bags of rice to them.

Alex Obemeata, NYSC’s spokesperson in Katsina, who disclosed this in a statement on Tuesday, said the President’s gesture was delivered to them when they visited him in Daura to celebrate the Eid-El-Kabir.

“Usually, when Mr President is at home for Sallah celebration, corps members go to his house to welcome him and wish him ‘Happy Sallah’.

“In like manner, on July 20, 2021, the corps members in Daura were at the President’s house for the Sallah wishes, and it was a celebration of the century.

“They were given two cows, 20 bags of rice and N1 million,” the NYSC spokesperson disclosed.

He said that the President commended the NYSC members and urged them to be good ambassadors of their country and committed towards the development of Nigeria.

According to Mr Obemeata, the state coordinator, Ahidjo Yahaya, on behalf of the NYSC Director-General, Shuaibu Ibrahim, thanked the President for the gesture.