12 Visible Bullet Wounds In His Body; How Haitian President Died 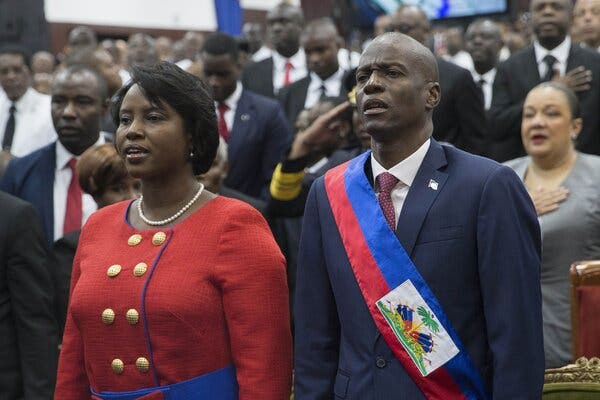 Posted at 07:22h in Society Plus by TQR Editor 0 Comments
0 Likes
Share

Fresh details of the assassination Haitian President Moise emerged over the weekend as the troubled country searches for the mastermind and motives. Carl Henri Destin, a local district judge tasked with investigating and documenting the crime scene, described the gory sight the greeted him.

“The doors were riddled with bullets, the glass was broken, the doors were smashed, even the locks were destroyed and lying on the ground,” he said.

Inside, up a wide bloodstained stairway leading to a bedroom, Destin says he peered through another smashed doorway, and saw his President lying on the ground.

“He was wearing a white shirt and a pair of blue jeans. His shirt was ripped and full of blood. I saw 12 visible bullet wounds in the president’s body…they smashed his left eye, but both were still open.”

According to the remaining government — now led by acting Prime Minister Claude Joseph — Moise’s home was attacked around 1 a.m. He was killed, and his wife, First Lady Martine Moise, was wounded.

A group of at least 28 people are suspected in the killing, of which 26 are Colombian and two are US citizens. So far, 20 of those suspects have been detained, five are on the loose and three have been killed.

According to a spokesman for the acting Prime Minister’s office, the burned-out cars found down the street from Moise’s house belonged to some of the suspects, whom police later confronted in a shootout.

The nearest storefront, decorated with a worn banner quoting Psalm 27:1’s “The Lord is my light and my salvation; whom shall I fear?” testifies to a fearsome battle with mounds of shattered glass, bullet marks and streaks of blood.

Also unclear is how the killers were able to penetrate multiple levels of presidential security, including police checkpoints on the road and Moise’s personal guard.

But strangely, despite the apparent scale of the attack, and signs of rampant gunfire in the President’s home documented by Destin, none of the President’s guards were injured, Haiti’s elections minister Mathias Pierre told CNN. Obviously, there are more questions than answers now as investigations continue.